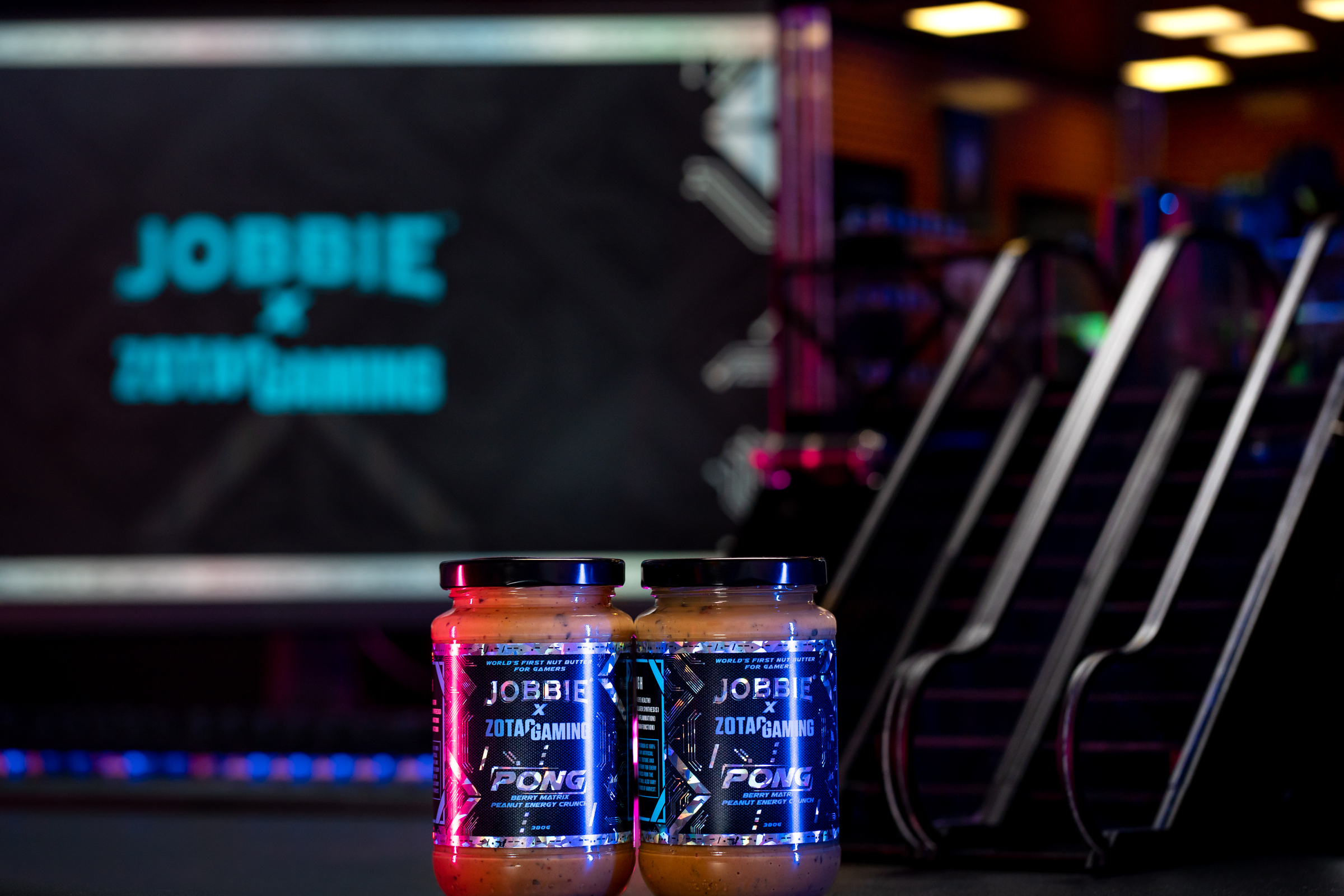 4 months ago Zotac Gaming Malaysia wrote us an email saying “LET’S COLLAB👩‍❤️‍👨”! A gaming company finding a peanut butter company? We thought they had played too much video games causing them to  lose some screws in their head and were as nuts as us🤪 (pun intended!).

We proudly introduce the world’s first gamer’s nut butter🎉 - 【JOBBIE’s PONG - Peanut Energy Crunch, Berry Matrix】. As long as its mouthful name, we longed to create a peanut butter with a sole purpose of helping gamers enhance their gaming performance🧠.

“But firstly, why the name PONG?”🤔

As we attempt to create the world’s first gamer’s peanut butter we wanted to pay homage❤️ to the first arcade video game ever create - PONG🏓, a table tennis–themed arcade sports video game created in the 1972 by Allan Alcom.

Unlike any Peanut Butter we’ve ever made in a typical spread/jam form. PONG, is a Peanut Energy Crunch, meant to be eaten DIRECTLY from the spoon🥄 itself. Mimicking an energy bar/gel but in a more potent, intense and healthier thick creme as it is made with real fruits and nuts, without the use of any artificial fillers!🤯

“How does it taste like and how does it help gamers”?🧐

A super rich thick peanut mousse made from dry roasted peanuts🥜, followed by slightly sweet and sour chopped up freeze dried blueberries🫐 and strawberries🍓. The freeze dried fruits provides more crunch (as the moisture has been completely extracted) than a bowl of freshly made popcorn, making it the perfect snack in-between games.

Blueberries are rich in Carotenoid to aid the eyes👀 in long hours of screen time. Embedded deeply into the molecular nutrients of strawberries are rich antioxidant to help with the brain/cognitive functions🧠! The fragrant roasted peanuts also provides high energy and fibre content, helping gamers in their gaming stamina!💪

“What is the inspiration behind the label packaging?”🤷‍♀️

The design theme was heavily inspired by pop culture such as The Matrix and the retro game🕹 - PONG, to give the vibe of a techno-inspired world within a label packaging.

Clusters of circuit board wires can be seen “solder” unto the packaging like a motherboard, plated with holographic films that resembles the RGB (red, green, blue❤️💚💙) light in a gaming PC set💻-up. In different angels of viewing the packaging, different colour can be seen similarly like a rare black opal jewel!

In addition, multiple cryptic message👽 has been hidden in the packaging in the form of latin letters✍️, mathematical equation and morse code. A total of 3 secret messages can be found to symbolise the perfect pairing of the trinity ingredients ie Peanut, Blueberries and Strawberries!

“To game or not to game, that is not a question but, if you treat life as a game you will be gamed”???
—Self-proclaimed-no-one-cares food expert and creator of the PONG flavour, Joseph Goh😤.